Born on 6th August 1887, Dr Joseph Dudley Benjafield was an eminent bacteriologist and pathologist who practiced at the Evelina Hospital, London. During WWI he served as Captain in the Royal Army Medical Corps. When the ‘Spanish Flu’ struck in late 1918, he served with the British Egyptian Expeditionary Force where he observed the pandemic’s clinical course, publishing his findings in the British Medical Journal in 1919. Later, during WWII, he briefly rejoined the Medical Corps as a Major. When he returned to civilian life he was appointed as Consultant Physician to St George’s Hospital and at the Harley Street clinic, where he worked for the rest of his career.

During the interwar period, ‘Benjy’ – as he preferred to be known – developed a passion for motor racing. Following the first Bentley win at Le Mans in 1924 he visited the Bentley showrooms in Hanover St, London, where he acquired a long-chassis 3 Litre. Shortly after he aquired the two-seater 3 Litre Bentley EXP2 formerly raced by Frank Clement. At the Whitsuntide Meeting at Brooklands in 1924, Benjafield won the Private Competitors race at 90 mph. That same year at the circuit, he comfortably won the Short Handicap Race at 90.5 mph.

Having raced with such verve and energy at Brooklands, W.O. Bentley decided to invite Benjafield to partner Kensington-Moir for the 1925 Le Mans race.

He was, according to W.O., the first of the true ‘Bentley Boys’. Both steady and reliable, tough, well built, “totally bald, Benjafield was always tremendous fun, and renowned for being a strong supporter of off-duty fun and games”.

Most importantly, Benjafield became the founding member of the British Racing Drivers’ Club (BRDC). Keen to organise dinner parties at his Harley Street house for his friends and fellow drivers, these gatherings laid the foundation for the birth of the BRDC, inaugurated in April 1928. Initially there were twenty-five members that promoted a shared set of values and beliefs. The newly formed club was to promote the interests of motor sport in general. Specifically, its aims were to celebrate any particular performance in motor sport, afford hospitality to racing drivers from overseas, and further the interests of British drivers competing abroad. Membership was initially restricted to racing drivers of proven success and experience but quickly grew following the BRDC’s decision to move into race organisation. Their first event, the BRDC 500-Mile Race, took place at Brooklands in October 1929. At that time, it was the fastest long distance race in the world, fittingly won by a 4½ Litre Bentley driven by Frank Clement and Jack Barclay. 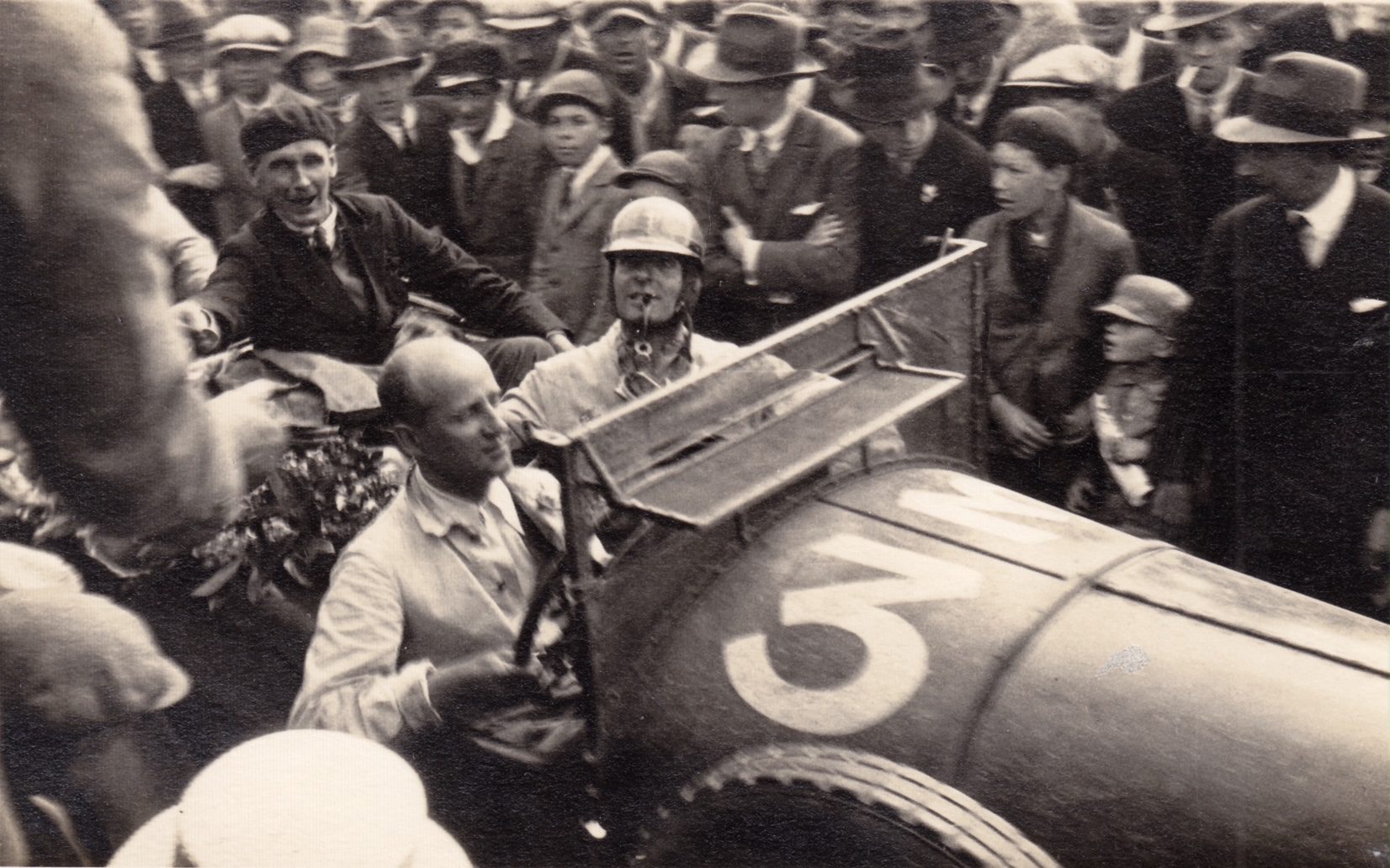 In many respects, the experience Benjafield had gained at Brooklands proved to be invaluable at Le Mans, where the bald-headed chemist attained legendary status. The 1924 racing season had been very successful for ‘Benjy’. He remarked: “Dame Fortune never smiled on me so warmly as she did in 1924, when it seemed I could do nothing wrong.” His race wins had been founded upon verve and composure, meticulously assisted by the engineering prowess of his racing mechanics, Browning and Lord Settrington. Fortune, however, proved to be fickle.

Following the Duff/Clement Bentley win at Le Mans in 1924, fortunes turned distinctly calamitous in both 1925 and 1926. Indeed, the 1925 race was later described by W.O. as the first ‘black’ Le Mans for Bentley Motors. The company entered two 3 Litre Bentleys. Bertie Kensington-Moir was partnered with Benjafield and Frank Clement with John Duff. In 1925, the classic ‘Le Mans start’ was introduced whereby for the first 20 laps the cars had to race with their hoods erected. Careful consideration had been given by Bentley to fuel consumption tests, but only with the hoods down in full race-long trim. With the hoods raised for the first 20 laps, the additional air resistance completely distorted the fuel consumption calculations. After 19 laps, Kensington–Moir, who had begun the race, failed to appear as he had run out of fuel. Benjafield’s race had been run even before it had started.

At the 1926 Le Mans, Bentley entered 3 Litre cars piloted by Clement/Duller, Thistlethwayte/Gallop and Benjafield/ Davis. The race, however, was to be another ‘black’. Duller retired with valve trouble, Gallop with a broken rocker arm, and Davis ploughed into a sand barrier. It was hardly surprising, then, that given none of the Bentleys completed the course, W.O. decided to give up racing entirely and concentrate on manufacturing production cars instead. To both Benjafield and Davis, this decision was anathema. They agreed between themselves that they would do their utmost to reverse this decision. Benjafield commented: “I had lost none of my confidence in the Bentley as the finest sports car in the world and was convinced that… many a race could yet be won”.

However, perhaps more importantly, in mid 1926 a radical change in the financial fortunes of Bentley Motors transpired: the arrival of Woolf Barnato as chairman. His fresh injection of capital brought an immediate end to the fear of financial failure, and more significantly he gave an unflinching commitment to racing. Similarly, W.O. began to realise the absolute necessity of eradicating successive defeats at Le Mans. The time had come to race again. 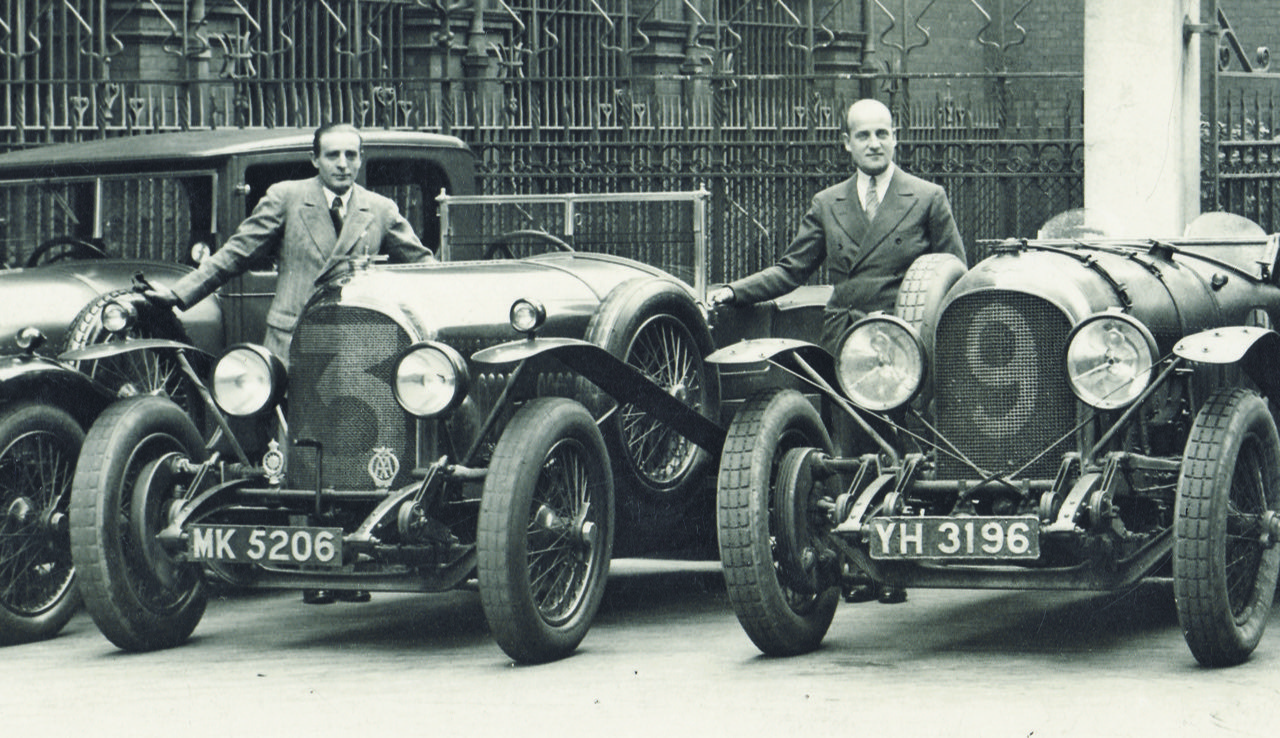 – – – Sammy Davis and Dudley Benjafield in a 1929 Autocar photograph showing some of the successful Le Mans Bentleys – notably ‘Old Number Seven’ (car number 3 in the photo) from 1927, at the south end of Carlos Place, Mayfair, London – – –

Much has been written about the heroic 1927 victory at Le Mans. Bentley had three entries: the new 4½ Litre driven by Clement/Callingham, the 3 Litre of Duller/d’Erlanger, and the Davis/Benjafield 3 Litre. Benjafield remarked:

“Callingham, in the 4½ Litre negotiated White House Corner at dusk to find the road half blocked by a French Schneider. Then followed George Duller in No 2 who thereupon rammed the back of the 4½ and completed a parabolic somersault into a field [followed by another French entrant]. He picked himself up and ran back to attempt to warn Sammy Davis in No 3, but it was too late. Davis, suspicious by seeing heavy brake marks in the road and a headlight shining like a searchlight into the sky, entered the corner 20 mph slower than usual. Nevertheless, No 3 unavoidably joined the mêlée but was able to continue to victory…her front wheel buckled, frame bent and headlamp, wing and running board smashed.”

It was dark and started to rain when Benjafield took over the car shortly after 11pm for his stint in the race. With limited vision due to the single headlamp and the heavy rain, he raced on through the night until handing back to Davis in the early hours. When Benjafield took over for the last stint of the race it was little after 1pm. They were strongly established in second place behind the Aries of Chassagne and Laly, which would later fail due to engine issues. Shortly before the end of the race, and in first position, Benjafield came into the pits to hand over to Sammy Davis so he could take the flag – a gesture of sportsmanship by a true gentleman. The mostly French crowd went crazy. “Vive Bentley!” they screamed, realising the momentous achievement they had witnessed. For a car to be so badly damaged and then go on to win the 24-hour race was truly magnificent.

The publicity associated with this stupendous victory was unparalleled. As W.O. noted: “ Headlines, photographs, maps of the course, wildly inaccurate and journalistic reports appeared in every newspaper the next day…it has remained front page news ever since.”

Days later, The Autocar hosted a legendary dinner at The Savoy Hotel. Following Bentley Cocktails, Sir Edward Iliffe rose as Chairman and proclaimed, “Gentleman, I feel there is somebody missing…” At that moment the curtains behind him were drawn and on the stage there was an unremitting explosion, the air rent by a familiar exhaust roar as No. 3 Bentley, still bearing her battle scars, still with her single head lamp blazing, burst into life. 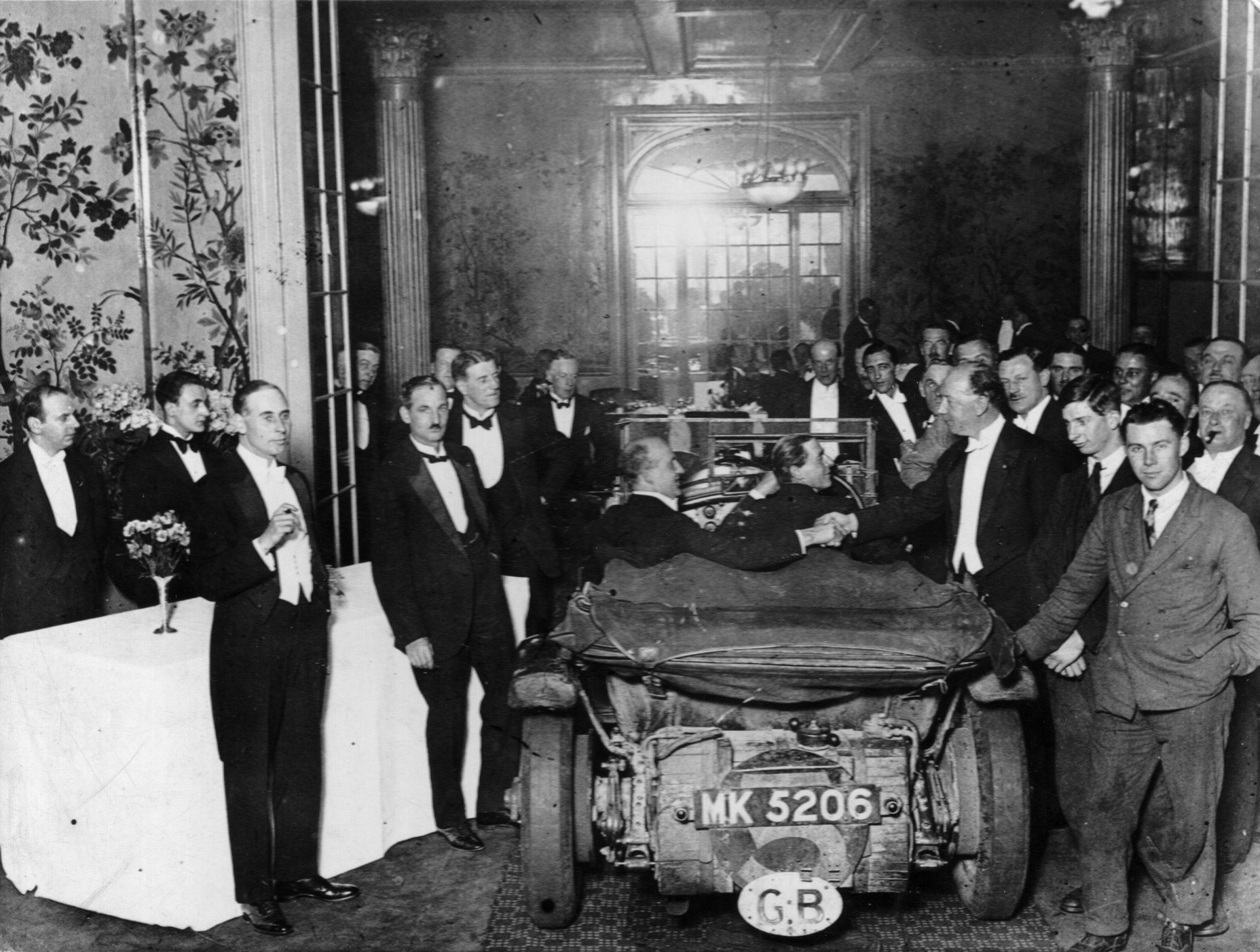 – – – J.D.Benjafield sitting in the passenger seat at the Savoy dinner, shaking hands with Sir Edward Iliffe – – –

All the major motorcar manufactures, with the exception of Germany’s, were represented at Le Mans in 1928. The Bentley works team consisted of two new 4½ Litre Bentleys with ‘bobtail’ coachwork, driven by Clement/Benjafield and Birkin/Chassagne, and ‘Old Mother Gun’, a 4½ Litre driven by Barnato/Rubin who, despite a cracked chassis frame, went on to win the race. Benjafield was leading the field after six laps and beginning to conjure up visions of a consecutive Le Mans victory until, that is, ‘clouds of smoke exuded from the bonnet and hot oil was sprayed over my legs’. Clement repaired the fault at a pit stop but finally retired when a disconnected water hose emptied the radiator.

1929 was the most successful year on record for the racing Bentley, and the Le Mans race of that year was no exception. Five Bentleys were entered with four of them finishing in line astern taking the first four places. It made headlines the next day – The Hat Trick!

The Bentley field consisted of the Speed Six of Woolf Barnato/Tim Birkin, and four 4½ Litres driven by Clement/Chassagne, Kidston/Dunfee, Benjafield/d’Eranger and Howe/Rubin. It was a formidable team with Barnato/Birkin winning the race with Benjafield/d’Erlanger finishing in third place. The Bentley name had earned the much vaunted title of ‘World Champions of the Road’. It’s hardly surprising, then, that most other motor manufacturers had largely thrown the towel in by 1930!

At Le Mans in 1930 it was to be the battle between Bentley and the Mercedes of Caracciola and Werner. Benjafield was paired with Ramponi to drive a Supercharged Bentley 4½ litre and was part of the Hon Dorothy Paget Equipe along with Sir Tim Birkin. The eventual winner was the works Bentley Speed Six of Woolf Barnato and Glen Kidston. After Ramponi was taken ill, Benjafield drove for a 10-hour stint and was lying third after 20 hours and forty minutes but failed to finish due to a broken valve. It was to be the last time a works-prepared W.O. Bentley raced at Le Mans.

After Bentley Motors retired from racing in 1930, Benjafield turned to other manufacturers to continue racing. These included Alfa Romeo, Alvis, Aston-Martin and an ERA that he shared with Earl Howe in the 1936 British Empire Trophy at Donington. This was to be his last year of racing.

In a fitting tribute to this gentleman racer, W.O remarked: “Benjy was the first of the ‘Bentley Boys’, a grand and most reliable of drivers.”